The 'Outlander' TV series has taken the world by storm! This itinerary takes you to the principal places featured in the books and many of the film locations.

Please note that this is a self-guided tour. If you would be interested in a guided tour, then click here.

We suggest two nights in Edinburgh at the start. This gives you time to recover, adjust and see the main sights. You probably won’t want to embark on Edinburgh Castle on the day you arrive, but instead take an open top bus tour of the city and then make your way to the ‘Royal Mile’ on the look-out for burnt out print shops, Moubray's Tavern (which you won't find) and the World's End (which you will), along with the Canongate Kirk and Carubbers Close. We provide you with a short 'Guide to the Royal Mile for Outlander Fans'. At night, there are several excellent (and rather unsettling!) tours of the nether parts of Old Edinburgh. We have assumed a four star hotel close to The Royal Mile.

On Day Two you see the castle where there are excellent audio guides (allow at least two hours). Then either head down to the Palace of Holyroodhouse or explore some of Edinburgh’s (18th century) ‘New Town’ including the Georgian House in Charlotte Square.

Pick up your rental car on Day Three and navigate to impressive Craigmillar Castle (Ardsmuir in Season Three). Then, after admiring the Forth Bridges from South Queensferry, cross the road bridge and head along the Fife Coastal Route to Dysart (barely recognisable as Le Havre) and up to Falkland, easily recognisable as Inverness 1940s and 1740s. After lunch at ‘Mrs Baird’s B&B’, head across to Gleneagles, Tullibardine Kirk (where Claire gave herself up after the Battle of Falkirk) and Drummond Castle Gardens (Versailles). Night in Crieff. 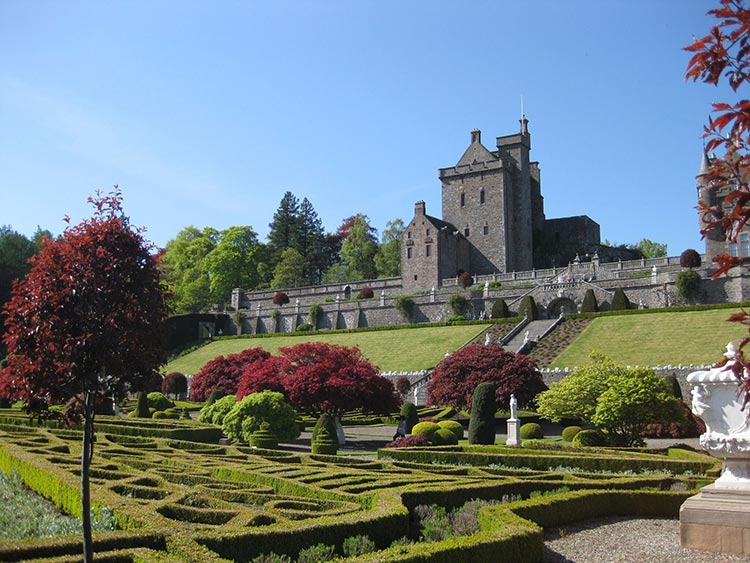 On Day Four you head up by Aberfeldy and General Wade’s famous bridge to Loch Tummel, the arterial A9 and a look at the House of Bruar. Then, after the long Drumochter Pass, divert to Newtonmore and the Highland Folk Museum (rent gathering scenes).

We suggest that you now have two nights at a four star B&B in Inverness. Next morning you will no doubt want to see Culloden Battlefield and enjoy the visitor attraction, complete with a 'total immersion' experience. Then wander out through the echoes of the Battlefield and visit the Fraser stone by the grave where they lie. 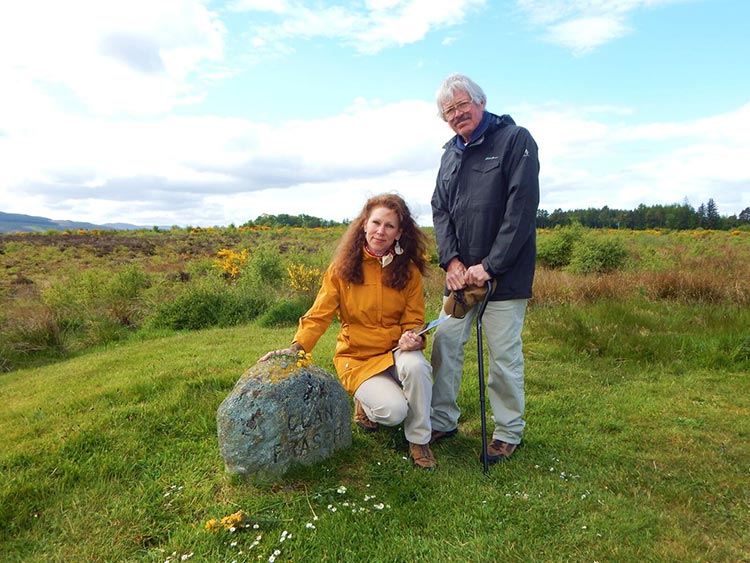 A short way from Culloden are the Clava Cairns - a peaceful place by the river where three bronze age graves are surrounded by circles of standing stones, one of which is split in two. In the afternoon, we suggest a visit to Wardlaw and the Fraser mausoleum. Then to Beauly, a neat town with traditional shops, close by the ruined 13th century Priory where Claire met the prophetess.

We are now on Day Six and you head down the Great Glen, passing Urquhart Castle by Loch Ness, and head across to the west coast. Divert at Shiel Bridge over the steep and twisty Mam Rattigan Pass to Glenelg (wonderful views) and see the best remaining brochs on the mainland. After lunch at the excellent Glenelg Inn, take the small turntable ferry to Skye for a night. If you have made good time you can re-cross to the mainland on the bridge and see super-picturesque Eilean Donan Castle. 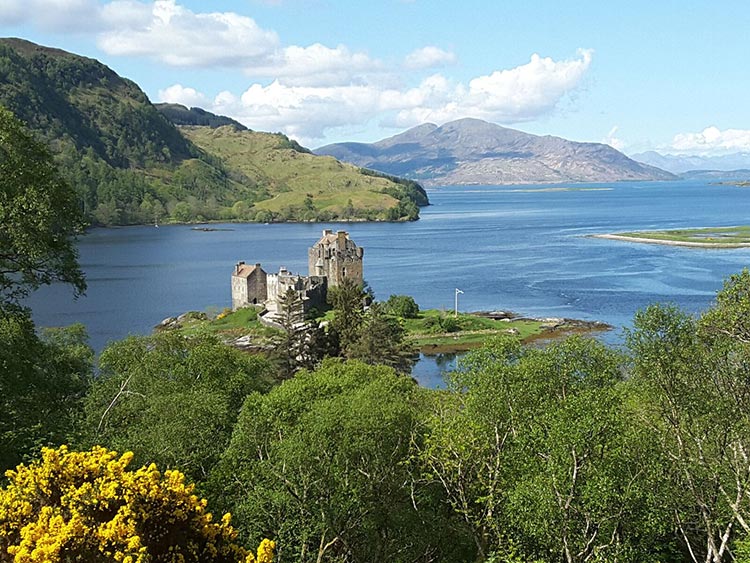 Day Seven. Take the ferry from Armadale to Mallaig, then by Loch nan Uamh (where Bonnie Prince Charlie both arrived in Scotland in July 1745 and left for France in September 1746) and Glenfinnan (where he raised his standard on 19 August 1745). From there, your road is by Fort William (only a piece of wall remains of the old fort) and Ballachulish to Glencoe. Even before the Massacre of the Glencoe MacDonalds, this must have been a dark and threatening place, but with the knowledge of events in February 1692, it's bleak indeed.

In contrast, Rannoch Moor is stunningly beautiful with shimmering pools of uncertain depth and incurably wild in all seasons. The road then winds close to the Falls of Dochart and down to Callander and Doune Castle (Castle Leoch). Night in Stirling area. 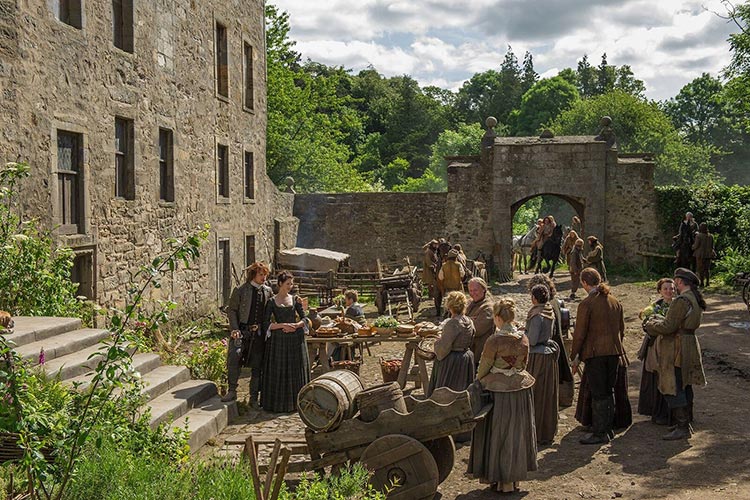 Others may prefer to see Stirling Castle where the infant Mary Queen of Scots was crowned (Don’t miss the actors in the Renaissance Palace) and then perhaps the National Wallace Monument.

On the last day some iconic film locations… Blackness Castle (Fort William), Linlithgow Palace (Wentworth) and Culross (Cranesmuir and other places), also the nearby ‘Black Kirk’ . Stay at a hotel by the airport.

We strongly recommend that you take out trip insurance in case of unforeseen circumstances.Special arrangements for Covid related cancellations on request. Clans and Castles is registered under the official 'Good to Go' scheme. For more details on our terms and conditions please click here.

Price varies according to dates of travel.  If you would like to know, more about the trip then send an email to me, Diana Gray

The trip was just perfect! Everyone always asks me what my favorite part was, but it all was so wonderful I could never pick just one thing. I have such fond memories, I could go on and on for days. So I'll just say don't change a thing. Once again thank you so much for such a wonderful experience!

Thank you for the holiday of a lifetime! It surpassed all our expectations. Cannot recommend you highly enough.

My tour was a dream come true. A million thank yous for a once in a lifetime experience.

This was the most magical, wonderful vacation ever!!! Thanks to you we had a gloriously-beautiful and educational tour through Scotland. You brought Diana Gabaldon's books to life for us.

I have been remiss in not having written sooner, but the memory of Scotland and the Outlander Tour will be imprinted in my heart and mind for a lifetime. Although I am a Gabaldon fan, this tour far exceeded my greatest expectations. Your attention to detail brought the history of the Highlands to life in a way I would never have imagined. I was moved by vivid descriptions of battles and personages, castles and outposts and a country and heritage, that although not mine, were both tragic and romantic. This was a great tour that awakened the mysterious charm of Scotland and its people. Thank you!

This tour beautifully brought together the dramatic history of Scotland's highland clans with the story of Jamie and Claire Fraser that we all love. With the help of Alastair, our knowledgeable and charming tour guide, the Outlander book characters came to life before us in the castle ruins, heather covered moorland, and Edinburgh pubs. Thank you for a once in a lifetime adventure!

Thank you so much for our Tour. It was absolutely magical and I enjoyed every minute of it.

Though the tour referred to our itinary, it was so much more. It balanced the beautiful sights wth your knowledge of history. It was a memorable and enjoyable experience. I have traveled Europe before, and your tour ranks among my best experiences.

I had been looking forward to this 'Outlander' tour for a couple of years and your trip exceeded all my expectations! As you know, my husband Pat knew nothing about the books but came along for the ride and enjoyed the tour just as much as I did.

You filled us with stories about Scottish history, clans and the countryside that made Diana’s books come alive for us. Not only did we see the most amazing and breathtaking scenery but you took us to out of the way places that regular tourists would never see.