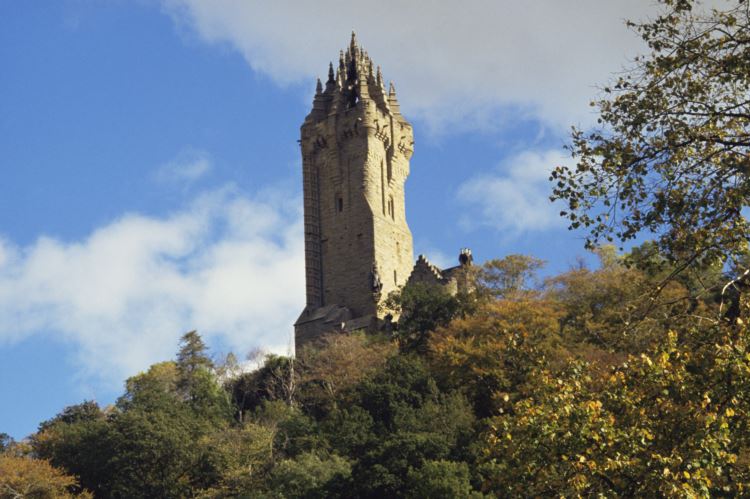 Even 15 years after the blockbuster film ‘Braveheart’, most people in the English-speaking world have heard of William Wallace. He galvanised Scottish resistance to the English occupiers in the late 13th century, and (as was graphically illustrated in the film) was hung, drawn and quartered in London in August 1305.

However the film misleads in suggesting that he wore a kilt, smothered his face in blue woad and was as small as Mel Gibson. Wallace stood about 6 foot 5 inches, and was a minor nobleman, living 300 years after the woad-obsessed Picts. He would have worn armour, as illustrated in the two depictions below, one from the National Wallace Monument, the other by an unknown artist hanging in the he Stirling Smith Art Gallery & Museum.

The National Wallace Monument on Abbey Craig outside Stirling was completed in 1869, (572 years after his stunning victory against a larger English force there in 1297). Hence the 150th anniversary celebrations this year with an expanded programme of events. It’s an impressive monument and a great visitor experience, but be ready for those 264 stairs!

Plans for the monument had begun many years earlier and a competition was arranged to find the best form of honouring The Great Patriot. My favourite entry is by Sir Joseph Noel Paton: a massive sculpture of a Scottish lion in the act of killing the English typhon, to be cast in bronze. But this was considered ‘too provocative’!

One of the least visited and most impressive depictions of Wallace is a statue (five times life size) at Bemersyde, very close to Sir Walter Scott’s celebrated view across the Tweed to the Eildons. There is no connection between Wallace and Bemersyde. But Sir William was a Lowland Scot who spent much of his guerrilla campaign based in the Ettrick Forest above Selkirk, attended by Borderers (and Kerrs in particular). It was almost certainly at the medieval Kirk o’ the Forest at Selkirk that he was proclaimed Guardian of Scotland in late 1297.

So, visit the National Wallace Monument in its 150th birthday year, but find time too for Bemersyde, Selkirk and the lovely Ettrick Valley.

Scottish Dukes in the 21st Century Scotch-Irish Camelot by Kelso